This update intimately describes why Variety exists, and why our equipment is simply life-changing.

12-year old Addy’s mom, Brandy truly “opens her front door and welcomes us inside” to fully experience her family’s journey, by sharing,

“Everything we received from Variety has been life-changing for our daughter, who has low functioning autism along with an intellectual disability.

Let’s start with the communication device.

Before receiving her first device (almost five years ago), Addy’s communication was non-existent.

She had no words at all and was considered non-verbal.

After years with her device and learning her communication app, Proloquo 2 Go with her speech therapist, Addy is able to easily navigate the app to communicate her needs to us.

This video shows the progress she’s made since that first device! She’s a Proloquo champion now (click here to watch).

Through using the app, she also started forming some words on her own! She used to sit and ‘practice her words’ by hitting a picture, like burrito and trying to say it.

Before her device, she had absolutely no words. Now, she says about 100 words without prompting on her own, and for the ones we don’t exactly understand, she’s able to use her device.

The device has been a game-changer, from helping her communicate aches and pains, along with helping us find lost toys she was looking for. These scenarios could easily have sent her spiraling into a meltdown.

Even for simple things like the video will show, she uses the device to say a picture she’d like printed and laminated (her favorite past time is her photo collection).

I don’t know how many meltdowns that have been avoided by having this communication device, but it’s a lot.

Okay, now onto the stroller.

Addy has always been a runner. Before she started using an adaptive stroller, it was unsafe and virtually impossible to take her out in the community.

After she got to an age where she could out run me, which came very early on around 6 years old, it was no longer safe to take her out in the community.

Unless you have a child with a disability, you couldn’t understand how it effects every aspect of your life.

I couldn’t take her grocery shopping.

I couldn’t take her safely to her doctors’ appointments.

I couldn’t even take her to do fun things in the community like, the zoo or the local street fair.

On top of being a runner, Addy also has a lot of self-injury behaviors and aggression, but the stroller is her safe spot.

Now, if she starts having a meltdown with self-injury or aggression, we can safely get her to the car without her trying to flee, or without her dropping to the ground (she does this during meltdowns and she now weighs 100 pounds).

Without her stroller, we would have no choice but to stay home, as it is not safe to have her out in the community without a stroller that locks her in… but now, I can grocery shop, I can take her to Kennywood, and really do anything with her!!

So far with the stroller, we’ve been able to go to the Zoo, Kennywood , the Butler Fair, along with doctors’ appointments, the pharmacy –  you name it, we can go there now. Addy loves the stroller, too. We even used it to go trick-or-treating!!

And last, but not least, the adaptive bike… 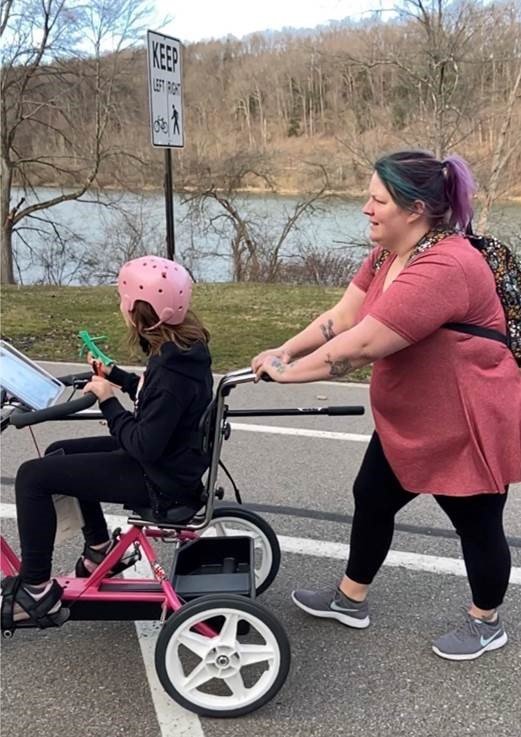 I will tell you, I wasn’t very interested in getting the bike. I actually passed on it when we got her first communication device because I didn’t think it would be something that Addy would enjoy.

But boy was I mistaken! The only regret I have is that we didn’t try to get the bike sooner.

When we got Addy’s second communication device, her occupational therapist really encouraged me to apply for the bike as well.

She thought it would be something Addy would enjoy, but I still had my doubts.

Fast forward, we got the bike and set it up on the stationary stand that was given to us because it was still cold outside. It took Addy a few days, but she warmed up to it. She began pedaling in place and loving it!

She would put her talker on the stand and go for about 30 minutes, which is awesome because she’s also getting tired out – and that means the world to us special needs parents because we are ALL sleeping more and better!

So, we decided once the weather brake to take her to North Park to ride her bike, and she absolutely loved it!! 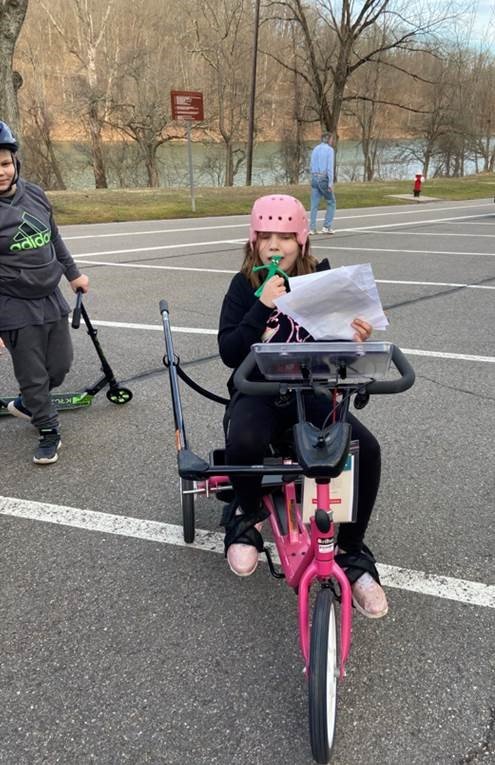 She loved it so much that we now take her there to ride her bike every week, and it has become part of her routine that she looks forward to doing! We even had to print a picture of her bike to put on her calendar every week!

And, every time we go to North Park, Addy rides her bike for 2-miles!

We can’t thank everyone at Variety and all the donors enough… life with our daughter has really been opened up in all ways since receiving all of the equipment from Variety!”

I keep reading over Addy’s story, and I can’t help but wonder, “What if Variety was only able to provide one piece of equipment versus all three (forcing families to choose)?”

I AM GRATEFUL for all the opportunities we’ve been able to give to these amazing kids and their families…. TOGETHER!