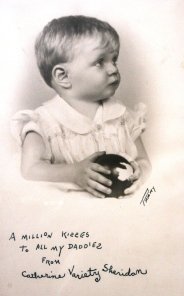 It began with one child…

The “Variety Club” (as it was once known) was initially founded in 1927 by a group of 11 theatre owners and showmen in Pittsburgh, Pennsylvania and was designed then as a social club that did charitable acts.

In late-December 1928, the 11 men were playing cards backstage after a matinee performance at the Sheridan Square Theatre, when they heard whimpering from the auditorium. When they investigated, they discovered a one-month-old baby girl left in a seat to whom her mother had pinned a desperate note.

“Please take care of my baby. Her name is Catherine. I can no longer take care of her. I have eight others. My husband is out of work. She was born on Thanksgiving Day. I have always heard of the goodness of show business people and I pray to God that you will look after her.”

The club decided that they would act as 11 “Godfathers” and underwrite Catherine’s support and education, and named her Catherine Variety Sheridan — her middle name for the club and her last name for the theatre. 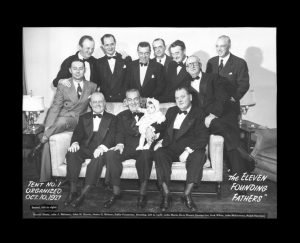 The “godfathers” continued to support Catherine even after they found her a permanent home with a family. The community was also inspired by Catherine’s story, and more clothes, food, money, and toys were collected than any one child could ever need. The “Variety Club” used the surplus to help other disadvantaged children.

Catherine’s story became an inspiration to help children everywhere and since those early beginnings, Variety – the Children’s Charity (as it’s known today) has become an international organization with a network of 42 offices (or tents) in 13 countries and has raised over $2 billion to help children in need throughout the world (www.variety.org).

When Catherine was five years old she was adopted by a carefully selected loving family. Over 300 families applied to adopt Catherine, whose name was changed to Joan to protect her identity and ensure as normal a life as possible. Joan lived a happy life. She served the United States in both Korea and Vietnam as a registered nurse, as well as spending a great deal of her life helping disadvantaged children.

She remained anonymous until 1980 when, at the request of Variety International, she attended the Variety Convention in Los Angeles with her husband and three children. Catherine/Joan passed away on September 9, 1994 at age 65, but her inspiration and motivation to help children in need shines brightly today through Variety – the Children’s Charity.

Variety has its roots in the entertainment industry, but its core is in the community. People from all walks of life can contribute and experience the joy of helping children in need.