“Very happy that I finally have that chance to ride a bike and just be happy. Like normal kids because I can’t do a lot of things that normal kids can do,” said Lyla in an interview with WBRE-TV.

You don’t want to miss the full interview to hear more from Lyla and her Grandmother, Sharon, so click below:

Students receive bicycles and strollers made to accommodate special needs

WNEP-TV also joined us, as Kareem and other kids received their new bikes! Kareem’s mom told WNEP, “This opens up a whole new world for him to be able to go out and socialize and play with other kids. He can’t ride a regular bike, so this is helping him to go out with his brothers and have a good time that he can’t do without it honestly.”

Click here to see the full piece and watch Kareem ride his bike for the first time:  https://www.wnep.com/article/news/local/schuylkill-county/charity-adapts-bikes-to-assist-children-with-disabilities/523-e6165b8d-54eb-436a-b0b9-cf78fcbf3650

At our core, we want to give kids freedom, and these smiles by The Shenandoah Sentinel truly captures the joy of the day for Kaylonie and Anayamarie!

IT’S ALL FOR THE KIDS!

As I take time to reflect, I am truly grateful for believing in our work to change the lives of kids with disabilities. With thanks, I want to send you a series of emails (starting with part 1 today) about the impact we’re having during the pandemic because I thought you would especially appreciate it.

In the midst of this pandemic, I have been inspired and had my life changed by a 17-year old named Corey, who is unstoppable!

This is one of the most incredible stories I have ever shared with you and amazing on many levels. I am sorry it is long… but I guarantee that you will be so grateful that you took in the whole story.

He had never ridden an adaptive bike until he rode one at Leg Up Farm.

Ever since, he wanted to have one at home, and he was scheduled to receive an adaptive bike and communication device at Leg Up Farm on April 3rd. Every day, he would ask his Speech Language Pathologist, Lu, “Is my bike there? Is my bike there?”

Corey’s mom, Michelle said that she and her husband (retired army) both love riding bikes, and were excited about the possibility of being able to ride with Corey as a family.

This opportunity to ride together has even more importance because Michelle is battling cancer and currently receiving chemotherapy. She wanted Corey to get the bike while she was healthy enough to ride with him.

The presentation at Leg Up Farm was cancelled because of the pandemic.

Michelle was disappointed about having to wait for the bike, but also that Corey would not receive his communication device because, “Corey is partially verbal – he tries to say everything he reads and tries to communicate, but it is hard to understand him, which is where the device really helps him.”

Michelle approached Lu, who called us, and with Corey’s Occupational Therapist, Nicole, and the leadership of Leg Up Farm, we created a way for Corey and other kids to receive communication devices and adaptive bikes in the middle of the pandemic!

The Saturday before Mother’s Day, Corey received his new communication device thanks to a Special Delivery by Lu to his home.

Corey received his adaptive bike at Leg Up Farm.

Michelle said, “Thanks to the bike and the device, Corey is making connections with neighbor kids he didn’t have before. This has meant the world to him. He just spent the last two hours playing with kids he has never played with before until now, and they live right around us.”

Corey’s SLP Lu sent us an update, “I am just amazed at how he has blossomed in the last couple days with both the bike and the talker. He so desperately wants to have friends and that bike has given him a way to meet them. Instead of just watching them, now he is joining in. Variety didn’t just give him a bike, it opened up a whole new world for him. Variety has truly made a difference in his life!”

Check this out – here’s a video that Corey filmed himself from a Zoom meeting with Lu and his mom.

And to top it all off!

After only having his device for 10 days and his bike for 5 days, Lu said,  “It really was wonderful to see him being so independent with his device. He knew exactly what he wanted to tell you and he wanted to do it completely by himself. Now that he’s seeing just how much he can do by himself, he is gonna be unstoppable!”

Does it honestly get much better than this – that in the midst of a pandemic, in partnership with the therapist and his parents, Corey is becoming empowered to live a dramatically different life.

COREY, THE UNSTOPPABLE… I love it!

WE ARE GRATEFUL TO RICKY and our partners at Blackburn’s, who are helping us make sure other kids can get their new adaptive bikes during the pandemic!

I hope you’ll check out this 1-minute video that we put together to thank 10-year old Ricky and highlight how grateful we are for his help! Wait until you hear Ricky at the end of the video. It truly knocked me out with joy!

Ricky continues to give back, as his mom, Michelle told us, “Ricky has been so excited about his bike. He gave his 2 wheeler with training wheels to his friend that lives across the street. Now, they can ride together and Ricky is just one of the kids. This is a game changer for him!”

With great joy, one of our Central Pa. partners are using the training videos to safely give out 5 adaptive bikes this week!

We’re jumping for joy to continue our work of impacting kids with disabilities!

TODAY AT 4:00 PM, we celebrate Joke #10 in our JOKES WITH JACOB smile series, and we feel it’s something worth celebrating, together! You can keep up with all of Jacob’s jokes on Facebook or YouTube. 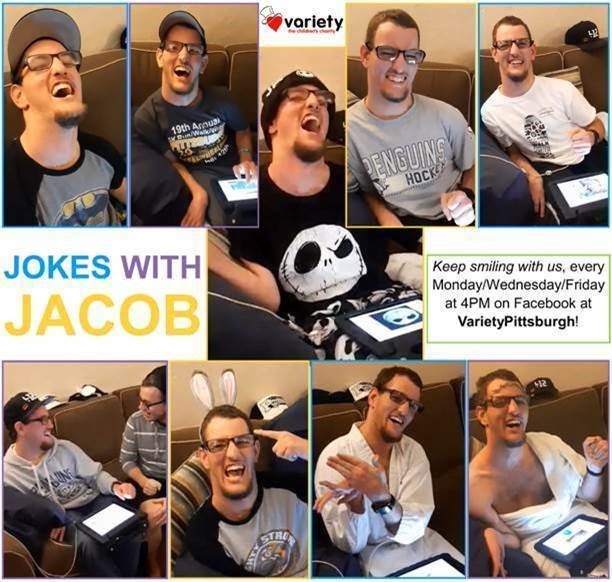 For Jacob, and so many other kids with disabilities, this time of “stay at home” has been especially hard, since it’s completely changed his daily activities. It’s changed his life completely.

We cannot forget about our kids and their challenges, especially now. Our kids just want the chance to be part of something.

JOKES WITH JACOB has been an enormous boost for Jacob, as it gives him purpose and helps him to give back to others through laughter. It’s also inspiring others to think of how they can give back. Excitingly, Jacob’s first 9 jokes have reached more than 34,000 people!

We hope that you’ll continue to follow JOKES WITH JACOB, and help make sure that our kids are not forgotten (BUT CELEBRATED) because they have A LOT of joy and beauty to give to us all.

When 4-year old Nik received his communication device, he was BEAUTIFULLY surrounded by his  parents, siblings, grandparents, and even his aunt and uncle.

All of whom came to the presentation to celebrate this life-changing day and to show their commitment to helping him every step of the way.

Nik’s mom, Nikol gave us perspective to why she was originally hesitant to try a communication device, and the impact it has since had on her son,

“Watching your child struggle with something is one of the hardest things. Especially when that struggle is with communication.

We as Nikolas’s parents… growing up… we would never think twice about being able to verbally communicate. Something, we feel we took for granted.

We have tried to be so proactive with helping him communicate. When Nik’s speech therapist asked us about utilizing an iPad in class to help Nikolas, we had a concern that it would hurt more so than help Nik. ‘Would he use the iPad and not want to try to speak?’ We were worried, but after support from his teacher and speech therapist, we decided to try it.

To our surprise Nik seemed to come home, almost daily, and it felt like he was able to verbally communicate more that day or week than the last. Janet asked if we were interested in having one at home and without hesitation we happily said ‘YES!’

To have Nik come home and not struggle with verbally communicating his wants as much, whether picking up more words or utilizing the iPad, would be such a blessing.”

After receiving his device, Nikol sent us this 30-second video of him using it to tell her what he wanted:

Thank you for believing in Variety’s work and helping us, help more kids.

3-year old Hazel was all smiles, as she checked out her new communication device (and ate a tangerine). She received the device last Tuesday through Variety’s My Voice® Program, and we are still beaming with joy for her and her entire family.

Her mom, Mary told us,

“Hazel wants to communicate. She tries so hard to tell us what she wants and what she’s thinking, but she runs into the limitation of her ability very quickly. While Hazel communicates with sign language, she only has about five spoken words, and it’s very difficult for her to form words.

This communication device is a tool for kids like Hazel to find their voice, and be able to express their wants, needs, and feelings to those around them. I don’t know about you, but I would love to hear what Hazel has to say now with her device!

On Monday, January 27th, Variety presented adaptive equipment in Erie, and what a day it was!

6-year old Brayden received a communication device AND a bike, and you have to read what his mom shared…

“Brayden is nonverbal, so he doesn’t speak, so this device is going to really help him. And it’s just, it gets tough because I’m a single mom at home, I have limited income and I have another child who’s high functioning autistic. She speaks and everything, but she’s just having some trouble with emotions and dealing with others.

And so we just take one day at a time, but he’s just – all of these kids with special needs are such blessings, but it’s hard, it’s really hard sometimes. And you just want to make it as normal for them as possible, because they have enough challenges, so you just want to give them love and help them communicate as best they can. So I’m very thankful.”

Earlier that day, Variety held a Press Conference with City of Erie Mayor Joseph Schember, Saint Vincent Hospital CEO Dr. Christopher Clark, representatives from Intermediate Unit 5, Barber National Institute, and others from the Northwestern corner of Pa. to make a big push to identify every eligible child who could benefit from their own communication device.