We hope you can smile and celebrate with us, as you read the recap below on reaching an incredible milestone! 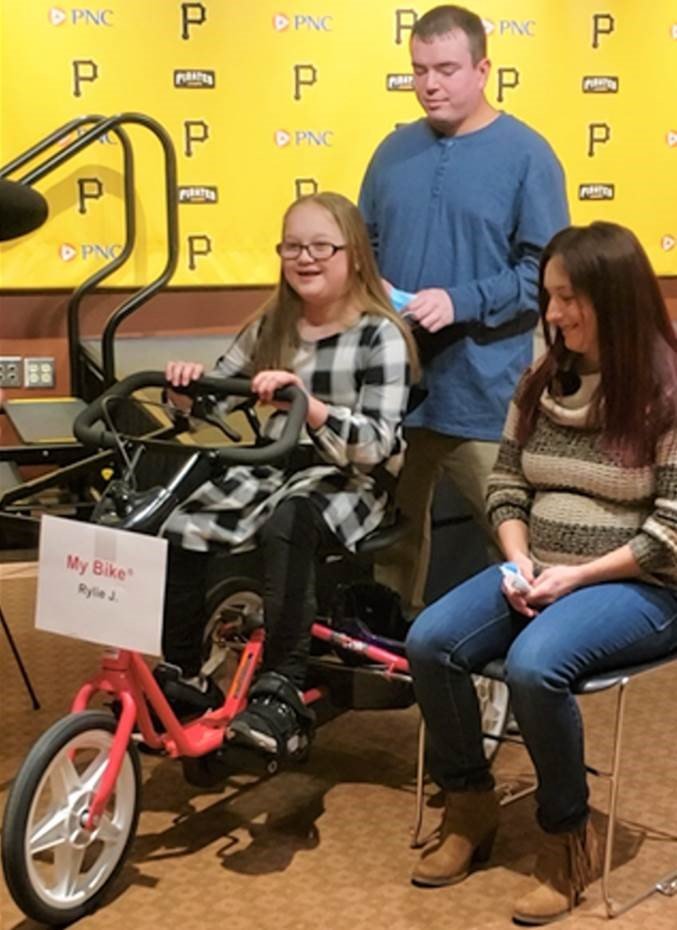 Last Wednesday, we presented the 5,000th piece of adaptive equipment, which means that we have presented “5,000” adaptive bikes, adaptive strollers, and communication devices to kids and their families (worth more than $7.75 million altogether)!

#5,000 was a PINK adaptive bike presented to Riley (pictured above), and she AND her parents were so happy and excited. Beforehand, Riley’s mom, Suzie helped us understand the bike’s significance, by sharing,

“Riley never rode a bike before starting physical therapy at Children’s Hospital of Pittsburgh. We tried tricycles and training wheels, but they weren’t equipped for her like this special bike.

The first time Rylie rode the adaptive bike in therapy, she was so proud and happy to be riding a bike.

As she pedaled around for the first time on it, she exclaimed, ‘I’m doing it! I can ride just like everyone else!’

When I told Rylie that she was approved for My Bike, she was so happy and said, ‘I can ride a bike with my friends now!’

Finding Variety and getting this bike taught and motivated me to think about how many other things we thought Rylie can’t do, that she actually can do with the right tools or equipment. Rather than, ‘Oh, she just can’t,’ my mindset now is, ‘How can she? How can we find a way?’”

You don’t want to miss watching Riley explain for herself what the new bike means in this KDKA-TV news piece.

Additionally, we were grateful to have the same key partners, who were influential in helping us kick-off My Bike nine years ago:  The Honorable Tom Corbett, County Executive Rich Fitzgerald, Highmark’s Deb Rice-Johnson, PNC’s Andrea Carelli, and the Pittsburgh Pirates’ Travis Williams (pictured below in order on adaptive bikes).

As we continue to meet the mobility and communication needs of kids with disabilities, at the very center is ensuring that all children have a way to communicate.

This TribLive article features Tyler, and it highlights his miraculous voice journey with the help of a communication device from Variety.

Wednesday, January 26, 2022 will always be a significant date in Variety’s history, but reaching this milestone happened because of the support, enthusiasm, and dedication of SO MANY people and organizations.

We applaud the entire COMMUNITY, and THANK YOU from the bottom of our hearts for what you’ve helped us to accomplish for kids and their families.

Six years ago, Variety kicked off “My Bike” with the presentation of Bike #1 at PNC Park with then Governor Tom Corbett, Pirates’ President Frank Coonelly, PNC’s Andrea Carelli, Highmark’s Deb Rice-Johnson and Allegheny County Executive Rich Fitzgerald. We had an idea at that moment and the desire to impact kids with disabilities.

Six years later, we returned to PNC Park with not only “My Bike”, but “My Stroller” and “My Voice” with all three of these programs changing kids’ lives in dramatic ways. Since November 2012 when “My Bike” kicked off, 2,500 bikes, strollers, and communication devices have been presented and $4.3 Million has been donated to provide this life-changing equipment, and we’ve expanded our service area from 10 Southwestern Pa. counties to 54 counties in Pa. and West Virginia.

I was especially impacted by Clint Hurdle’s words for all of us in the room last Friday,

“To see this type of opportunity is priceless to me. We have a special needs daughter, Maddie, who is 16 years old. She has never ridden a bike and wants no part of a bike. The joy I walk out of here with is seeing the smiles on the faces of you parents and grandparents, and the independence these bikes give your children. I know the joy we get when someone takes a part in our daughter’s life. It makes our journey a little easier.”

Last Friday was not only a flashback to where “My Bike” began and where it has gone today, but Variety also presented 5 adaptive bikes as part of the Pirates’ CARE-a-van that allowed Pirates’ coaches / players to interact and walk alongside our kids, including:  Josh Bell, J.T. Brubaker, Cole Tucker, Jacob Cruz, Joey Cora and Justin Meccage. Excitingly, three of the five bikes presented were sponsored by the Pittsburgh Pirates’ Alumni.

To see Manager Clint Hurdle leading our kids in the parade for yourself, then click this link!

Krissy summed up the bike’s impact by saying, “The day that I rode bikes with my brother for the first time was one of the most amazing days of my life. It may be the very best day ever!”

Thank you for following along with us – we could not be more grateful for you!

P.S. If you have a few minutes, you can watch this short video that portrays our journey from an idea to the impact we are creating today for so many kids.

It was a “home run” at PNC Park on August 13, 2013, as 17 children with disabilities received their very own adaptive bikes through Variety’s “My Bike” Program.

Madyson, age 4, from McKeesport, received her adaptive bike during “The Gift of ‘My Bike’ at PNC Park” event.

Following the event her mother said, “We are so thankful and blessed. We can’t say “thank you” enough. She loves her new red bike.”

Kelly Frey, WTAE Channel 4 News Anchor and mother of Bennett and Marena, summarized the impact of the event by saying, “To be here today, with all these smiling faces and incredible kids is a blessing to witness these 17 kids get bikes today.  When I come here and support Variety, it’s because I do so out of the bottom of my heart and as a parent who truly walked in your shoes.”

Jerry MacCleary, President, Bayer MaterialScience and Co-Chair of Variety’s “My Bike” Program also said during the presentation, “I’m in, I’m totally in, I’m committed.  We’re going to make a difference.  We’ve done a lot so far, we’ve raised enough for 325 bikes, but you know there are thousands of children out there that are in need of a bike, but can’t afford one.  So our work’s not done.”

The day it all began…

“What a great program to roll out that we can help make children with disabilities mobile, give them freedom, allow them to interact with other children their age who don’t have disabilities… I can’t think of a better program for that mobility and for freedom than ‘My Bike’.” -Governor Corbett at the kick off of Variety’s “My Bike” Program

“Aubrey really loves her new bike!  It’s her new-found freedom!  The best part is… Aubrey doesn’t want to get off!  We are so very grateful for this wonderful bike!” -Jill, mother of Aubrey

“When Kody first rode his bike it was like a miracle,” said Kim, Kody’s mom.  “Everybody was so amazed that Kody could do something other than be in a wheelchair.  It was like he was just this typical child riding a bike with a helmet on and being a normal child.”